How to Read an Auction Report. You need those basics.

99.9% of all Japanese imports are sold through the auction houses, where each vehicle is issued an auction report with the grade.

Auction report comes in Japanese, however even if you don’t know the language you can still get the most vital info: a car’s VIN number, mileage and grade. 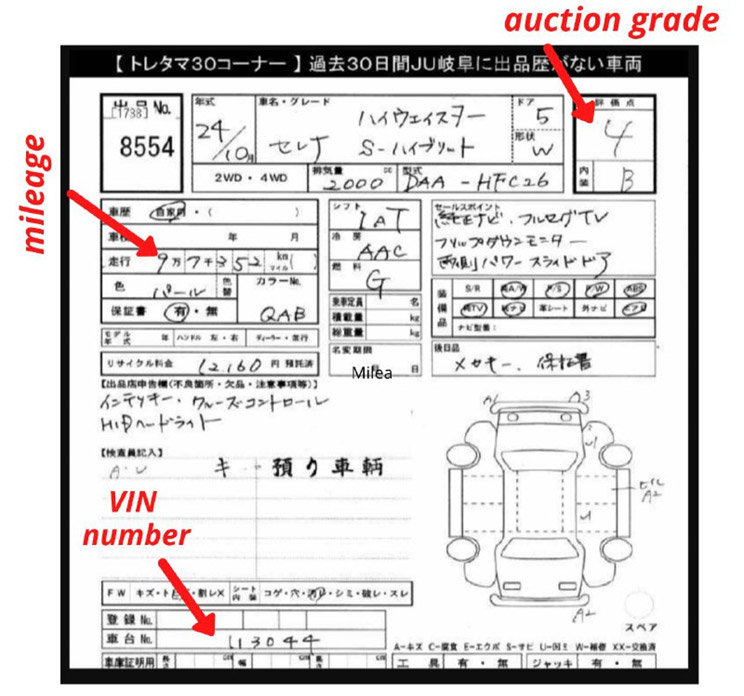 The best auction grade for a second hand car is 5A, it indicates a near new body condition without scratches/dents + mint condition interior. It’s given mainly to 1-3 year old vehicles with low mileage.

However, cars imported to Australia are usually 7-10 year old and over.

So, the grades you’d expect for a good condition vehicle are 4B, 4C and also 3,5B if a vehicle is over 10 years old. I had quite you a few epic imports 2005-2009 with a humble 3,5B grade that looked absolutely pristine from the first to the last row.

What auction grades should be avoided at all costs?

Usually R (accident grade) and 3,5D (and everything below – 2 and 1) are the worst and the prices for vehicles with those grades are the cheapest at the auctions in Japan.

Grading could be subjective and therefore you need to see the vehicle itself to make a decision.

Initially I was against this car and expected nothing but trouble.

However, the report from the auction checker stated it’s just messy inside and missing a few plastic hooks (one bag hook at the back and interior light cover), so we decided to bid on it and got it.

When the car arrived, we replaced a couple of missing plastics (bought brand new at $20 a piece from Japan). And after full detailing that black VIP looked at least like a 4B car... and cost us less money.

So, never judge a book by its cover and where possible always look at the auction report + the car itself before making a decision. If you can’t check a car with the low grade, avoid it and move on.

And last but not least.

Auction report plays a very important part in the mileage verification process. I’ve seen so many people buying an import without verification and then really regretting it.

Be safe out there. Happy car shopping!